There are several ways to earn gold faster for Dota 2 Items. Killing creeps in lane, neutral camping, and killing heroes, taking down towers or getting an assist. 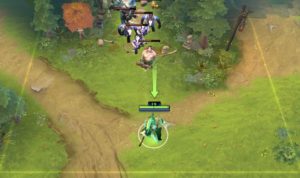 In this guide I will elaborate the things about creep stacking or pulling to help the carry heroes in your team farm faster. Usually supports are the one doing this task especially if the carry heroes are in dire situations or if they are having hard time farming on their lane.

Here are the heroes who can benefit the stacked camps without their core items:

Sven’s Cleave will definitely tear these neutral creeps even if the ancient camps are stacked up to 4 or 5. It will also benefit the King of the Gold with Alchemist’s Acid Spray. The Legion Commander’s Overwhelming Odds will surely instantly kill these neutrals but it will depend on the number of creeps on the camp. Sand King’s Sand Storm will help him get his blink dagger and other core items faster the usual by burying these camps with his sands. Meepo’s Poof will help the Meepo’s kill each stacked camps. Tinker’s March of the Machines will wipe these camps fast. Dark Seer’s Ion Shell and Vacuum will run these camps faster than the others.

Heroes mentioned above are usually have the abilities that can nuke creeps or has the ability to do damage on several units in one striking hit. Remember that there are several abilities that don’t affect Ancient Creeps.

In the previous update in the user’s interface, they’ve included a new feature called “Show Spawn Boxes”. In this new feature of the game you will know how camp stacking works and by this new feature you will now know when to pull the creeps out of their camp. The Screen shots below might help you in your task to help your carry hero get his core Dota Items.