Lake Rathetear is a large lake, almost a small sea that sits nestled in the distant wilds of Antonica. Many individuals who like to get away from the main population centers come to here to hunt for EverQuest Platinum and the Rathe Mountains because of their relative seclusion, and the lake and its surroundings are home to many who have carved out their niche. Aviaks, spellcasters, goblins, ogres, bandits, barbarians, gypsies, gnolls, and the occasional hermit all reside in this area. 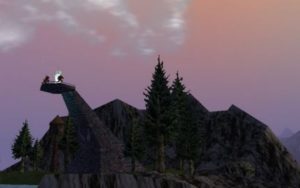 Lake Rathetear is a mid-level zone, and therefore is dangerous to people travelling through it that are of lower levels. The most dangerous part is the entrance from Southern Plains of Karana, which is heavily inhabited by gnolls during the day and undead at night. I recommend travelling through here at a brisk pace and invisible if possible if you cannot deal with these creatures.

The other significant danger is the fact that the zone is mostly aquatic. Relying on boats is chancy at best, because now that the zone is more heavily travelled, the boats aren’t always at docks like they used to be. Most of the walls are scalable, and it’s possible to walk around much of the zone clinging to a rock face, but there are definitely parts where you will be forced to swim.

Why is this dangerous? First of all, unless you are a truly excellent swimmer, fighting the aqua goblins, sharks, deepwater goblins, or Webclaw in the water is not going to be an enjoyable experience. The other problem is that there is rumored to be a lake monster that roams the lake. I haven’t heard of him harrying adventurers lately, but that doesn’t mean he isn’t simply resting.

The other miscellaneous dangers have to do with the way the zone is laid out, with little pockets of creatures and adventure separated from the zone edges by a lot of water. Also, the enemies either come in packs or are alone but hidden away inside of a tower or building, with very little nearby room to rest and relax. Stepping onto land can be a scary experience especially if you are aiming for large amount of EverQuest Platinum earnings.