Najena is a place filled with undead bestiaries with various types. The rooms are packed with them, with typically four skeletons of various types lying on the floor of any given room. Added to this are aggressive earth elementals and ogre guards, all of whom will attack on sight. 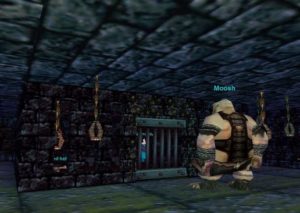 For adventurers in the lower level ranging from below 17th level or so and travelling in a group should be the rule. As simply walking in a room can result in four creatures jumping you at once. Once you’ve hit 17th, only the occasional Darkbone Skeleton will attack. For lower level adventurers, hunting in the front rooms and attacking the creatures that are there should provide enough excitement. Take care of these monsters and earn EverQuest Platinum.

Things to Remember in Najena for EverQuest Platinum

For higher level adventurers or groups, the zone is much more interesting than trying to fight off swarms of skeletons. There are several areas of interest. First of all, there is a whole key system to the lair of Najena. Various creatures and NPC’s carry the keys to access other areas within the lair. I will use the keys to describe how to move through the zone.

The ogre guards and Moosh carry a key ring, which will give you access to the prison cells. One note on Moosh, attacking him in the prison itself will make the injured Halfling join in against you, although when you kill him you take hits with all the Rivervale factions. This is especially a pain because Moosh will stupidly attack people way above his level, so even hanging out in there is a bad idea for reasons of faction. The first monster in the key sequence is Bonecracker.

Beware of the Bonecrackers to Earn EverQuest Platinum

Bonecracker is an approximately level 25 undead Froglok who lives in a room with two lovely dark elf necromancers. He also spawns the Barbed Leather Whip and Leering Mask occasionally, and he himself spawns every 20 minutes. He gives you the dull bone key. The ogre captain must then be killed to get the shiny metal key. These first two keys are the only keys that aren’t No Rent (i.e. they won’t disappear when you log) so hang onto them.