The Mines of Nurga are part of the large underground home of the goblins. Long ago the Mines were a vast network of busy tunnels, now all that remains are the ruins of the functioning mine and slaves busy doing the work by hand. 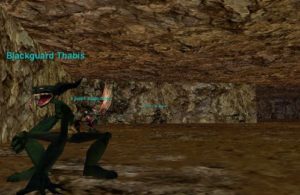 The entrance to the Mines is kind of tricky if you’re going to hunt for EverQuest Items. There is a large waterfall at the entrance from the Frontier Mountains, which is a very long and painful fall. This waterfall can actually be climbed if you’re careful, so isn’t as dangerous as you might think. Going upstream actually leads to a safer way to access most, but not all, of the rest of the Mines. The entrance from Temple of Droga, however, is very one-way, and leads down into a room with goblins in it deep within the Mines, so it’s best to be ready.

Facing Enemies in the Mines for EverQuest Items

All of the goblins in the Mines will aggro anyone, and many of them are casters who cast damage shields. They also like to run away when they are hurting, which can be dangerous with this many creatures around.

The spiders are tougher than the goblins are, and hit hard and move fast. They also will group together to fight in that area. Located in their area as well is the Sleeping Ogre, who really isn’t sleeping and will attack anyone inside of his huge aggro radius.

The Burynai are the hardest, mostly because they are in large groups and come to fight that way. Crowd control is essential, and the pathing in this area is known to be especially bad.

The Mines are one of the safer areas to hunt in the game. Unlike the neighboring Temple of Droga, where it is difficult to get a rest from the great number of goblins, here the creatures are spread out into discrete areas that one can clear and pull from more easily. With about four or five creatures in an area, this area can probably be hunted safely by lower level groups than those that could survive or do well in the Temple.

The spiders here are also frequently of higher level than the goblins, so higher level groups can make more experience hunting them than they can anything else. There are also three relatively separate areas to hunt within the dungeon. One is the goblins themselves, who occupy the most easily accessible areas of the dungeon. The second is the spiders, who are situated in the middle of the dungeon. The third area is the burynai area, which is a relatively densely populated area of caves deep within the mines.