You can play games for Habbo Coins. There are dozens of games to be played in Habbo. Some are official Habbo creations, while others are made by the users. Some are just for fun, while others are high-stakes. The latter can be a source of coins if you’re lucky or skilled enough to win consistently, so consider trying your hand at these sorts of games as a source of coins. 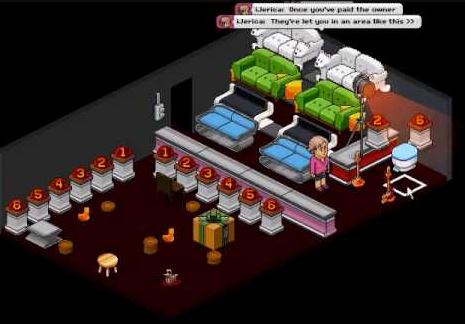 Play grabbers. One odd type of game in Habbo that can potentially win you big coin prizes is called a “grabber” or sometimes a “rare grabber”. Grabbers are essentially games of pure chance. In grabber, various prizes are laid out in a square grid. The player randomly selects two numbers from 1-6 (like rolling two dice) and wins the prize that’s in the corresponding square on the grid.[5] While the prizes can sometimes be lucrative, because you must rely on pure luck to win, they’re often not a wise long-term investment.

To determine whether a grabber game is profitable or not, find the game’s average payout like this: Add up all of the coins in the grid (if there are furni, use their coin value). Next, divide by the number of squares in the grid. For instance, if there are a total of 20 coins in a typical 6×6 grid, we would divide 20/36 = 5/9 = 0.56. This means that, on average, you’ll win about half a coin. If you have to pay more than this to play, the game isn’t a smart investment.

Note also that 6×6 grids aren’t always used. For instance, if the same 20 coins above were arranged in a 3×3 grid, there would be a payout of 20/9 = 2.22 coins per square on average. However, because you’re rolling two numbers from 1-6, the nine squares in the 3×3 grid represent only a quarter of your total combinations! In other words, 3/4 of the time, you’ll win nothing at all.