Everfrost is a permanently frozen area of frequent snowfalls and constant snow cover where EverQuest Platinum can be farmed. It is the northernmost zone, and is adjacent to the home of the barbarians, Halas. It is also adjacent to the gnoll home of Blackburrow, where all must pass if they want to enter the lands surrounding Qeynos, and Permafrost, a higher level dungeon to the east. Everfrost can be safely divided into two subzones, the canyons and the plains. 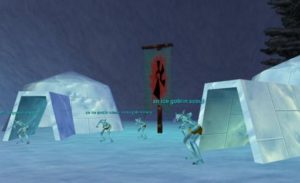 The canyons represent the newbie area for Halas. They are a twisting area of high ridges and very few open areas through which the lower level monsters move. This is also where the entrance to both Halas and Blackburrow lies.

The plains are an entirely different matter. The biggest problem here is that some of the most powerful creatures in the zone are also the most aggressive, namely the Orc Shaman and the Icebone Skeleton. The Orc Shaman can cast all manner of spells and can take on groups of level 11-13 characters, even though it is only about level 14-16. The Icebone Skeleton is difficult to see until it is upon you, and then does massive damage and stun attacks, as well as cast spells, and is about 15-16th level and immune to nonmagic attacks.

The other creatures on the plains that are dangerous are not aggressive, and these are the woolly mammoth. There are packs of people lining the western edge of the plains who send out a scout to bring in a mammoth or mammoth calf to kill here, and the only real danger is that they might bring back more than they can handle, and either perish or run to the guards, and bring the mammoths with them. The calves are about 14-16th level and the mamas are even higher.

The canyons of Everfrost are probably one of the wealthiest hunting grounds ever found. I consistently would return from hunting there with 2-3 platinum, even at low levels. By then you’re killing all the creatures that walk by, sometimes in hoards, and raking in the money and experience. The bears have pelts, the skeletons have weapons, and the pups and whelps quite often carry sacks.