The Crystal Caverns are the ancient home of the Coldain where EverQuest Platinum can be farmed. It is also named Froststone, long since overrun by giants and now Orcs and other creatures. There are five areas within the tunnels, each controlled by the Ry’Gorr Orcs, the Geonids, the Stalag terrors, the crystal spiders, or the Coldain dwarves. The Orcs control the upper parts of the tunnels, the dwarves the small remnants of their city, the terrors some abandoned halls, the spiders also some abandoned halls, and the Geonids a set of tunnels they created for themselves. 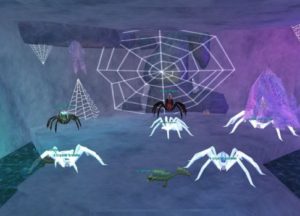 The Coldain will fight all the creatures in the zone, so you can use the Coldain as “guards” if you wish. The bad part about this is that they count the elemental illusions of enchanters as an enemy as well, and will attack them.

The Stalag Terrors are especially dangerous to hunt. They create very lethal trains and move very quickly, so pulling them is a serious undertaking. They are also, although roughly the same level as the spiders, much tougher and hit much harder.

Hunting Queen Dracnia is probably the most dangerous venture in the dungeon. There is a small area near where she spawns that most groups set up in, and a group in the high 30’s can do well there fighting rapidly spawning blues. The big problem hunting in this area is the trains that are created. These have been noticed to be bad when the Queen herself spawns, where one creature will flee and all the others from outside will rush the room. The rumors that this is a planned/triggered event are untrue, however.

EverQuest Platinum and Other Benefits of the Zone

The major benefit of this dungeon is that you can travel a large part of it safely within a certain level range. For instance, the Orcs are all relatively the same level. You can travel in a small group from the top of the Well to the bottom and hunt the whole way down without meeting creatures so powerful that you have to stop. Also, most of the creatures in this zone drop a variety of items and EverQuest Platinum, and in the Orc sections all of the rarer creatures can and do spawn anywhere, making hunting anywhere along the way profitable. Even without getting your hands on rare loot, however, you can easily make good money in cash from hunting here.