Effective ways of using spells and how they work, when they work best, when you should use them, how to combine spells and where to drop them. 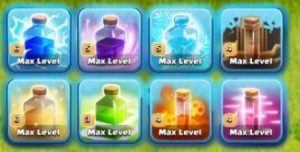 The idea of this guide is when we are trying to figure out the exact range of a Spell while scouting a war base. I found out that it can be sometimes hard to drop a spell perfectly so I thought a guide about the range of the Spells could be useful for your Clash of Clans Account. The main purpose is to find out if you can use a Spell on more than one thing.

Getting to know your Spell in Clash of Clans Account

Spell Ranges: Spells can be very effective if used correctly – but some are even more effective if you can double their power:

These 3 Spells will be the focus of this guide and I will show you how you can see exactly if your Spell will be able to be extra effective or not.

There are times that people are not sure if they just dropped their Spell wrong (let’s face it the displays are small and finger aren’t surgery tools) or if they tried something that’s not possible.

By acknowledging the knowledge of the spell’s radius you can make your attacks very effective;

These spells will surely help your Clash of Clans Troops especially in clan war if you’re attacking a village.